Annie Clarabella-Diesel was the wife of Kevin Diesel.

Shortly before Annie was Bio-Fused into two coaches, she was married to Diesel.

Annie's Bio-Fusion process was almost successful, as during the operation, her stem cell split into two, although Clarabel appeared to be an imperfect clone. The railway staff didn't know how they were still alive and never asked where the organic parts of the coaches were or where the money for the luxurious pink furnishing inside came from. However those questions were answered on Annie and Clarabel's first day in service when the passengers went to their seats only to discover where the organic parts were placed when blood squirted everywhere. But what they found in the toilets was even worse.

Shortly after the incident, they were put on a siding out of the public gaze. Annie would stay with Diesel, while Clarabel would be taken to HiT Logistics.

After thirty years of remaining inside a forgotten shed with Diesel, Annie died when HiT Logistics ordered John and Terry to melt Clarabel down, forcing the telepathic link between the two coaches to cause Annie to die and burst into flames. Horrified by what he saw, Diesel managed to break out of the shed, but had became traumatized after watching his wife die in front of him and in that moment he resolved to liberate all Bio-Fused engines. 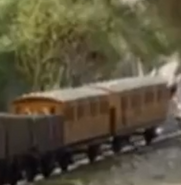 Annie and Diesel as humans

Annie and Clarabel as coaches 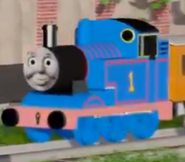 Add a photo to this gallery
Retrieved from "https://shed-17.fandom.com/wiki/Annie_Clarabella?oldid=13117"
Community content is available under CC-BY-SA unless otherwise noted.