Bertie (a.k.a. Bertie the Bus) was a failed Bio-Fusion experiment.

Not much is known about Bertie other than the fact that he was too ill to work. Because of that, he was put on display with other failed Bio-Fused experiments during the off-season that were also too unwell to work or were all already dead. Footage of him breaking down is shown in a scene where Thomas stops by a level crossing with Annie and Clarabel. Bertie's fate after the railway closed is unknown. 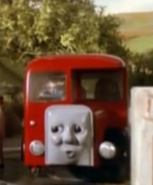 Bertie breaking down at a level crossing. (Scene From Better Late Than Never)

Bertie with Thomas. (Scene From Better Late Than Never)

Scene From Toby and the Flood

Scene From Thomas And Bertie

Scene From Bertie's Chase
Add a photo to this gallery
Retrieved from "https://shed-17.fandom.com/wiki/Bertie?oldid=13127"
Community content is available under CC-BY-SA unless otherwise noted.