Nothing is known about Donald and Douglas' past before they were Bio-Fused.

Both of them were experimented on by HiT Logistics to test the Telepathic Link between twins.

The doctors and specialists at HiT Logistics locked Donald at the pressure chamber, causing Douglas to wonder where he is. While Douglas is wondering where Donald is, his face and the sides of his boiler fell off, revealing a fleshy mass underneath his body, which slowly began to expand; because of that, the glass door quickly shuts. After the glass door was shut, Douglas immediately exploded, causing blood to splat over the glass window. 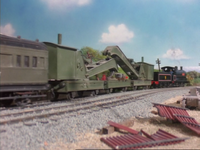 Donald being locked in a pressure chamber

One of the Scottish Twins in the review poster

Add a photo to this gallery
Retrieved from "https://shed-17.fandom.com/wiki/Donald_and_Douglas?oldid=12227"
Community content is available under CC-BY-SA unless otherwise noted.
Gaming: New Releases New in Entertainment Lifestyle: Travel