Sometime in the early 80's, Gordon paid a large amount to be the Island of Sodor's first 4-6-2 configuration engine. Sir Topham Hatt had insisted that he wanted Gordon to work on the railway, but Sodor Research were terrified to fire him up because of his size, so Gordon was to have his first test run when most of the regular staff went home.

When Gordon started to plead to douse the fire, the rail staff wanted to put it out, but Sir Topham Hatt stopped them, as he wanted to see what would happen and argued that he put a lot of work into Gordon.

Because of the heat of the fire, the pressure caused Gordon's boiler to buckle and dent, literally cooking his insides, and by the time the rail staff had the chance to act, Gordon exploded, injuring some of the rail staff with severe burns. This would lead to a domino effect that would end the lives of Harold, Henry, and Thomas.

At some point before his death, Gordon desperately pretended to not fit on the turntable to avoid being played with by the Steamies. He also set Knapford Station on fire due to his exposure to Welsh Coal. He also was in the Sodor Railways advertisement running, even though his first test run resulted in his death.

When Kevin Diesel crashed into the canister containing Project G-1, it used Gordon as its main face. The Monster would also attach it self to Toby, Merlin and Percy, using the latter as a weapon against the military. Later on, when Project G-1 was killed, a montage of Thomas and Gordon working on the railway was shown while Thomas mourned over losing his only link to his past.

In Thomas' PC Adventures, Gordon is portrayed as a member of the Tidmouth Sheds. He seems to tend not to trust newcomers.

Gordon, Thomas, James, and Edward in the sheds. 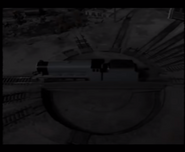 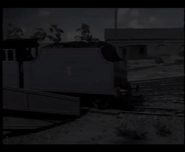