Sir Topham Hatt
Hans Götze is a German scientist, being the son of Wilhelm Götze and father of Thomas Götze.

Hans Götze was born somewhere in Germany in 1935. Four years later, at the beginning of World War II, He, along with his mother, Olga and father, Wilhelm fled their homeland to England.

As soon as they arrived, Hans and his parents were put in a detention camp on Sodor Island where they would remain until the war ended. However, Hans stayed on Sodor and left after studying under his father for many years.

When he reached adulthood, Hans went to university on the mainland where he studied biology and engineering. He also wrote revolutionary papers about "Bio-Fusion".

He founded Sodor Research LTD in 1962, and was later married to Abby Collins. In 1968 they had a son named Thomas Gotze.

Shortly after his resignation, Hans and Abby went into hiding. 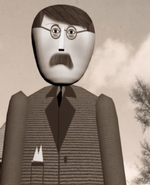