Henry's Dilemma is the fourth episode of Thomas' PC Adventures.

It is a very exciting time on the Island Of Sodor.

After three months of renovations at Crewe, Henry is finally returning. How will the other engines react to Henry's radical surgery? 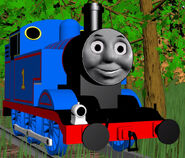