Alive (The Adventures Of Roly The Coach and Thomas' PC Adventures)

Engine of The Flying Kipper

Sir Topham Hatt
Henry Thierry (a.k.a. Henry the Green Engine) was a man who was Bio-Fused into a green tender engine that resembled a GNR A1 Pacific.

Henry was one of the few successful Bio-Fused engines on the island who was popular with the tourists and locals. Later on, he was hired by Sodor Research to clean the wreckage following the aftermath of Gordon and Harold's accidents.

On January 31st, 1983, Henry was diverted to Shed 17, which was off limits to everyone. Keith Hartley unlocked the doors, and Henry peeked inside, only to find out that Thomas was never actually Bio-Fused. This prompted Henry to confront Sir Topham Hatt about what he saw, resulting in an argument between the two, ending with Sir Topham Hatt sending Henry to the same shed as Thomas. It was there that Henry warned Thomas to stay away from Shed 17.

The next day, Sir Topham Hatt sent Henry to take the Flying Kipper run, which ran down the highest altitude line on Sodor. After a week on the kipper run, Henry was diverted onto a siding and rear ends with a goods train (because little did Henry and his crew know was that Sir Topham Hatt had stuck a spike in the points to block them).

By the middle of the day, Sir Topham Hatt arrived and then sent Henry to Crewe and was sadly scrapped to death.

Henry had seen it all.

Henry rolling down the track.

Henry shut up in a tunnel.

Henry at a station.

Henry in "Roly's Half Term". 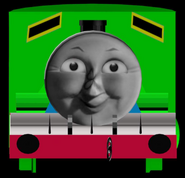 Henry in "Gordon And The Caravans".

Add a photo to this gallery
Retrieved from "https://shed-17.fandom.com/wiki/Henry_Thierry?oldid=13990"
Community content is available under CC-BY-SA unless otherwise noted.