HiT Logistics is a covert research company headquartered in the Northwestern United Kingdom.

HiT Logistics was tasked with continuing Bio-Fusion despite the fact that it was banned completely by the Government in 1984. Former Sodor Research professor Owen Routh was the head of Project G-1, which involved the deprogramming of Bio-Fused stem cells.

The project lasted for thirty years until the release of the Shed 17 documentary, creating a public outcry, and protests from Thomas fans. As a result, HiT Logistics started to remove evidence by melting down Bio-Fused vehicles and moving their remains to Blue Mountain Quarry. However, among the protesters were Cranky the Crane, who broke down the front gate to the facility, and Kevin Diesel, who charged into the building to expose what was inside. As he did so, he rammed into the container of Project G-1, allowing it to escape and assume any form of any size. 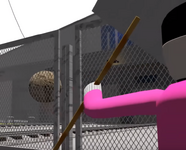 Unused Var.
Add a photo to this gallery
Retrieved from "https://shed-17.fandom.com/wiki/HiT_Logistics?oldid=13894"
Community content is available under CC-BY-SA unless otherwise noted.