The Island of Sodor

Bio-Fused Engines (Before and after isolationism), Humans, Keith Hartley, Owen Routh, Sir Topham Hatt, The Gotze Family (Before isolationism)
Sodor is an island located in the Irish Sea, between the England Lake District and the Isle of Man. It is also the place where Shed 17 takes place. Along with being the place where the Thomas incident took place. Shortly after the Project G-1 incident, the island was renamed Sodorland.

During World War II, the island of Sodor served as a detention camp for Germans living in England, amongst them was professor Wilhelm Gotze, his wife Olga and their son Hans. After the war ended, the Gotze family stayed on Sodor and when Hans was older he set up a lab called Sodor Research near Arlesburgh to experiment with Bio-Fusion. The lab was then connected to the Sodor Railway which Hans helped to manage, the railway was run using steam engines due to Han's fondness for them even though they were being withdrawn from railways on the Mainland. Hans went on to marry Abby Collins and together had a son called Thomas, who shared his father's love for steam engines.

The rail network on Sodor soon started to expand under the supervision of British Rail and Sir Topham Hatt was appointed controller of the railway, as a result most lines were closed down due to Sir Topham Hatt only caring about money. In 1978, Thomas was run over by a train while trying to catch it on his camera. Hans and Wilhelm wasted no time in getting him to Sodor Research to put Bio-Fusion into experimentation and bring Thomas back to life as a tank engine.

The news soon spread worldwide and people sent letters to Sodor Research requesting to be Bio-Fused, but the requests were rejected. But this all changed when Sir Topham Hatt brought a share of Sodor Research just so he could get tourists to visit the island and bring in more profits.

However the new Bio-Fused engines didn't have the same amount of work put them which resulted in most of them suffering problems due to the work load. Some engines ended up dying, while others became too sick to work. However Thomas didn't suffer any problems at all despite being the first Bio-Fused engine and soon people started to wonder why this was the case.

One night Thomas decided to find out the answer to this question and went to Sodor Research to look inside Shed 17, the place where he was turned into a tank engine. When Thomas looked inside he discovered just one of many attempts to clone the real Thomas Gotze's DNA with a tank engine and when he discovered one of the failed clones was still alive, his skeleton burst out of his unstable body.

After a government enquiry, Bio-Fusion was banned in 1984, resulting in Sodor falling into obscurity. However, despite the ban, the government tasked HiT Logistics to continue Bio-Fusion until 2015.

In 2021, Sodor was recognized as a Bio-Fused-only compound, and in 2032 a referendum was held to decide if it would break away from the United Kingdom to form its own country. Almost 98% of the engines voted for independence, and diplomatic ties with the outside world were cut off by 2040, causing it to fall into a state of isolationism. Little is known about Sodorland, except that Diesel 10 guards the border from outsiders, usually killing them. 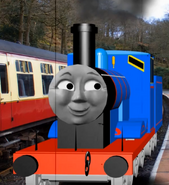 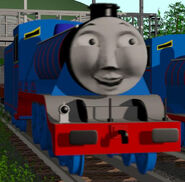 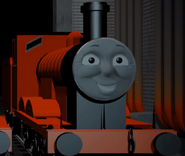 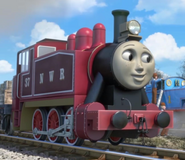 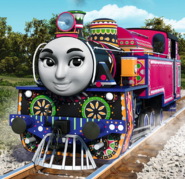 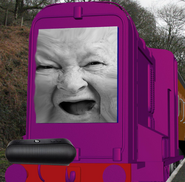 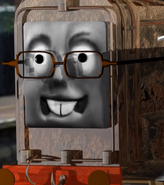 Shinty and Windy
Community content is available under CC-BY-SA unless otherwise noted.
Advertisement