Keith Hartley is a former engine fireman on Sodor Railways. He's also the main protagonist of Shed 17 Universe. He is voiced by Pauls Vids.

Keith Hartley began working as an engine fireman sometime in 1963 and became a friend to Thomas Gotze, who often visited the railway when Hartley was on duty. When Thomas was Bio-Fused into a tank engine, Keith was interviewed on TV many times to represent Sodor, although he vomited on all of his appearances. He told the story of Sodor Research in the Shed 17 documentary, but was framed as the cause for the suffering for Thomas and his friends. As revealed in Thomas The Tank Engine: Project G-1 he tried being a Steamie on one occasion, but apparently gave up right after witnessing the Steamies mistreating the engines.

After Project G-1 was killed by the military, he took part in the Project G-1 documentary before Thomas ripped him in half in a blind rage. He was then Bio-Fused by Sir Topham Hatt into a Troublesome Truck as punishment for his whistleblowing activities. He likely died later due to his organic components being exposed to the outside world. 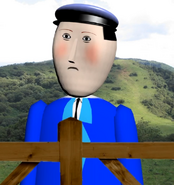 Keith Hartley in the newspaper

Keith again in the newspaper 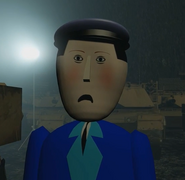 Keith as a Troublesome Truck

Keith in a band with Sir Topham Hatt and Professor Routh

Keith in Roly and Browny