Larry the Loco Meets Nellie the Nuclear Flask is a short comedy film released by Pauls Vids in 2017. It stars British Rail Class 46 46009, giving him the name of Larry, and is an edited version of his cameo scene in Thomas The Tank Engine: Shed 17.

As the narrator briefly describes Larry's design, he's shown hurtling down the track at Old Dalby, with the narrator swearing in panic as Larry collides with Nellie the Nuclear Flask as part of the 1984 Nuclear Flask experiment. Larry dies in the ensuing explosion, but true to the experiment in real life, Nellie suffers very little damage from the terrific collision. 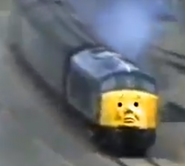 Shed 17 2
Add a photo to this gallery
Retrieved from "https://shed-17.fandom.com/wiki/Larry_the_Loco_Meets_Nellie_the_Nuclear_Flask?oldid=12570"
Community content is available under CC-BY-SA unless otherwise noted.