Oliver Surname (a.k.a. Oliver the Western Engine) was the childhood friend of Chris "Duck" Dickson.

Before Bio-Fusion, Oliver was a childhood friend of Chris "Duck" Dickson. They both shared their love of railways and the dream of working on Sodor, so they made a pact to become engines. At some point, he became Bio-Fused into a GWR 14xx tank engine.

Shortly after Bio-Fusion was banned, Oliver and Duck were offered a job by the Japan railway company. However, when they arrived Oliver and Duck discovered that under Japanese law, they weren't recognized as human beings and had no rights at all. They were converted with extra mechanical joints to become transformable boxers and were forced to fight each other to the death, which Oliver ended up losing.

Duck and Oliver in Thomas the Tank Engine: Project G-1 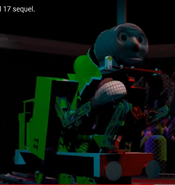 Add a photo to this gallery
Retrieved from "https://shed-17.fandom.com/wiki/Oliver?oldid=13385"
Community content is available under CC-BY-SA unless otherwise noted.