Deceased, Alive (Thomas' PC Adventures and The Adventures of Roly the Coach)

Percy Parker (a.k.a. Percy the Small Engine) was a failed Bio-Fusion experiment. He is Thomas' best friend.

Nothing is known about Percy's past before he was Bio-Fused into an Avonside saddle tank engine.

He did not survive his Bio-Fusion process and he was put on display during the off-season with other failed Bio-Fused experiments that were too unwell to work or already dead like him.

While Percy was on display, his eyes rolled into the back of his head, and his skeleton tilted out of his artificial frame, making his face turn to the side causing blood to spill from his smoke box. The crowd that were looking at him started screaming and running away from his corpse.

Some where before his death, Percy warned Thomas about the Welsh Coal, when he was covered in it.

Percy's remains were later used as a weapon by G-1 when it was under attack by the British military. The carcass crashes into the military line, causing at least one tank to explode and several casualties.

Percy being on a display, with a crowd. 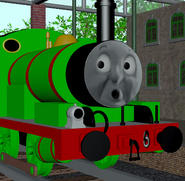 Percy being shocked that he brought Gordon oil tankers instead of the Express.

Hey, he's not so jolly now!

Percy with Thomas Gotze and Roly.

Percy if he was painted black.