Collecting all of the bio fused matter

Project G-1 was the pet project of Professor Owen Routh at HiT Logistics, as part of the first step of his plans to create a biological superweapon that he could sell for profit.

The project first started in 1985. The purpose of this project involved breaking down Bio-Fused matter to their very cells and deprogramming them.

In 2015, Kevin Diesel crashed into the canister containing the project, waking it up. Project G-1 rampaged through the HiT Logistics facility, assimilating any Bio-Fused engines still in the building and assuming its 'complete' form, a mutated version of Gordon which bore the faces and body parts of numerous other engines, including Edward, Toby, Kevin and Merlin.

Breaking out of the HiT Logistics complex and sending the Thomas Fans running in terror through the streets of Sodor, Project G-1 was met with opposition from the Army under the command of General Awdry, who had ordered several Bio-Fused Tanks to fight alongside regular ground units. The Army put up a good fight against the hybrid, but were forced to retreat when Project G-1 used its Percy thrower on the tanks, destroying some of them.

Project G-1 began rampaging across the Island, making his way towards the Blue Mountain Quarry, where the remainder of the Bio-Fusion material was being stored. Should Project G-1 have assimilated the materials there, he would have become unstoppable, and so the forces stationed at the quarry were put on high alert, and a plan was set in motion.

Thomas Gotze, now bearing a heavily-reconstructed body as a result of his numerous surgeries, was sent out from a shipping container right as Project G-1 arrived. The amalgamation roared menacingly at Thomas, but Thomas managed to calm the creature down, successfully befriending it and resulting in Project G-1 even mustering a smile. However, General Awdry couldn't afford this brief calm to turn into chaos once again; G-1 was far too close to the base's Bio-Fusion material, and the world was still in grave danger. He ordered his men to activate a detonator, which sent a Boulder tumbling down from a cliff above Thomas and Project G-1. The Boulder collided with Project G-1, sending it over the edge to its death far below. This was enough to send the briefly-calm Thomas over the edge and into a violent rage, which resulted in him picking up and tearing Keith Hartley in half as a result.

Project G-1 reaching it's hand out to Thomas

Project G-1 Roaring at the Army 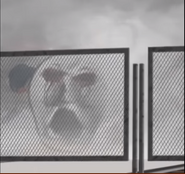