Roly The Coach is an LB&SCR four-wheeled coach built to a design by Stroudley between the early 1870s and late 1880s.

Roly Browning (a.k.a Roly the Coach) is the main character of The Adventures Of Roly The Coach.

He is the brother of Annie Clarabella.

Roly, Ferdinand and the Thomas Fans.

Roly as an secret cameo in Project G-1 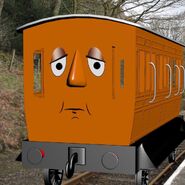 Add a photo to this gallery
Retrieved from "https://shed-17.fandom.com/wiki/Roly?oldid=13822"
Community content is available under CC-BY-SA unless otherwise noted.