Shed 17 Wikia
Register
Don't have an account?
Sign In
Advertisement
in: Videos, The Adventures Of Roly The Coach

Pauls Vids
Roly's Christmas Special is the ninth and final episode of The Adventures Of Roly The Coach in 2017.

Gordon: Sorry, Roly, but the party's been cancelled; no one was interested in going, so we had to call it off. Good night.

Henry: Oh, Roly, have you heard? There's no party tonight! Well, never mind. I'm off for an early night — visiting family in the morning. Ta-ra!

Oh, well, Roly. At least you get the day off tomorrow — and you can enjoy an early night tonight.

(Loud music can then be heard in the shed next to Roly's shed, and the engines are then seen inside partying. Thomas, Percy and one of the Scottish twins are bouncing up and down while Henry is watching them and Diesel is behind the DJ mix that has a MC DIESEL sign on front of it.)

(Ferdinand is snorting drugs off of Percy's boiler and gargles, while Edward is chatting up Mavis)

Edward: (sounding gruff) Hey, baby, how is it go—

(Edward then throws up over Mavis, causing her to look horrified. Roly then looks at the audience. The next morning, Thomas, Percy, Diesel and the Scottish twin wake up with hangovers)

Thomas: (groans sickly) What was I drinking last night...?

(Percy then throws up. Edward wakes up and discovers he's under a tarpaulin with Mavis, who's smiling broadly)

Thomas: Thank God we're not working today. We can sleep this off.

(Loud music suddenly can be heard from Roly's shed, and the engines groan loudly. The music is shown to be coming from Sarah as Billy had come to visit Roly)

(Roly looks at the audience and makes a small smile. Meanwhile, Gordon wakes up) 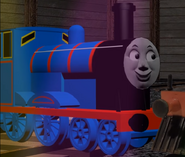