He is voiced by Pauls Vids.

Sir Topham Hatt was born sometime around 1913 in England. He was appointed controller of Sodor Railways after it found itself increasingly under the supervision of British Rail in the 1970s. He also gained lots of negative attention from the locals for firing steam engine workers and shutting down branch lines.

When Sir Topham Hatt heard that Hans and Wilhelm Götze had Bio-Fused Thomas Götze into a tank engine and were rejecting all requests from people asking to be Bio-Fused, he saw an opportunity to bring more tourists to the island and bought a controlling share of Sodor Research to Bio-Fuse people into machines in exchange for their entire fortune.

However when the engines workload increased, accidents started to happen to the engine's internal organs which led to some dying. Sir Topham Hatt tried to keep the accidents a secret from the public, and made anyone wanting to be Bio-Fused sign legal disclaimers so they wouldn't take any legal action. He then started selling the engines to other countries in multi-million pound deals which caused Hans to quit working for Sodor Research and Wilhelm to commit suicide.

When Gordon paid a large sum of money to be the island's first 4-6-2 configuration engine, Sir Topham Hatt saw an opportunity to make more money and put a lot of work in getting Gordon to work on the railway, however the railway and Sodor Research staff were scared about firing him up so Gordon had his test run when the Sodor Research staff (except for Owen Routh) went home. When Gordon started to complain about the heat, the rail staff (including Keith Hartley) tried to put out the fire, but Sir Topham Hatt stopped them, as he wanted to see what would happen. As a result Gordon ended up exploding whilst injuring several rail staff with severe burns.

Sir Topham Hatt blamed the staff for what had happened and stopped them calling for ambulances or the fire brigade, as he didn't want anyone from the outside to see what had happened. However, Owen told him that if they didn't do something, the injured staff would die. Finally, someone suggested airlifting the injured staff to the hospital on board Harold, despite the fact he was banned from flying for his own safety, but due to the circumstances everyone thought the risk was worth it. Unfortunately, as Harold took off, his internal organs were sucked in to his rotor and he came crashing down, killing himself and the injured people aboard.

By then it was morning and the smoke could be seen over the town, Sir Topham Hatt ordered the staff to close the gates, clean up the mess and dump the remains in the sea with some help from Henry Thierry. Despite being a successful Bio-Fused engine and popular with the locals and tourists, Sir Topham Hatt wanted to keep Henry away from the other engines as he hated him for his cheerful manner and life style choices as a human, so he saw the clean up job as an opportunity to do just that as it mainly involved working at night.

On January 31st, 1983, Henry was accidentally diverted to Shed 17 and discovered Thomas was never Bio-Fused, so he decided to confront Sir Topham Hatt which ended up causing an argument between the two. After Henry left, Sir Topham Hatt made plans to reopen an old line that crossed the highest altitude line in the country which had been closed down for being too dangerous and put Henry on it to pull the Flying Kipper.

A week later, Sir Topham Hatt went to the most treacherous part of the line and put a rail spike in the points to divert Henry in to a siding and make him crash into a goods train. The next day, Sir Topham Hatt sent Henry to Crewe to be scrapped hoping that the truth would be kept secret in Shed 17. However, Henry had warned Thomas to stay away from Shed 17 after his argument with Sir Topham Hatt so Thomas knew why Henry had been killed when he heard the news.

That evening Thomas went to Shed 17 to discover what was inside, and when he did, his skeleton burst out of his unstable body, which lead to a government enquiry at Sodor Research to ban Bio-Fusion. Afterwards Sir Topham Hatt ran away and disappeared without a trace.

Thirty years later, he had Keith Hartley Bio-Fused into a troublesome truck as punishment for exposing his unethical practices to the world.

He most likely died of old age. 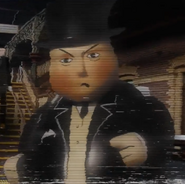 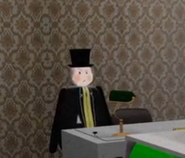 Sir Topham Hatt on board a train.

From deleted joke video where Edward ran over Sir Topham Hatt after he said "I'm a big fat-", and Edward finishes his sentence with "bastard." 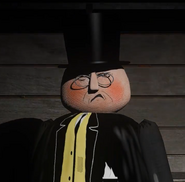 Sir Topham Hatt in a band with Keith Hartley and Professor Owen Routh.